Well this is fun. . . . The following is a word cloud generated by Wordle from this blog's RSS feed. 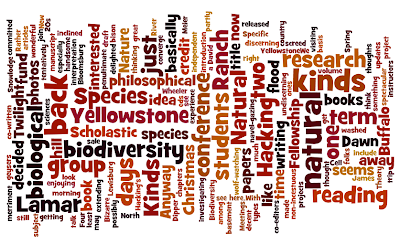 Email ThisBlogThis!Share to TwitterShare to FacebookShare to Pinterest
Labels: Random

Yellowstone in the Winter — take two

We made a repeat of our Winter 2007 trip to Yellowstone to once again do some wolf-watching with some of the great instructors of the Yellowstone Association. Four days at the Lamar Buffalo Ranch (where North American bison were basically rescued from extinction in the early 20th century), and three days at the Snowlodge at Old Faithful.

Like before, it was a fantastic time. For one, it was much warmer than it was in 2007. Rather than the –40° temps we endure (the point at which celsius and fahrenheit converge!), it hovered in the high 20s (F). And we got very lucky both with wolves — they basically came to us on Christmas morning and lounged about on the hill opposite the Ranch — and the geysers. Such a wonderful place. . . .

It turns out that "Nature" just released their "Christmas in Yellowstone" program (love the Dipper!). For my still photos from this round (involving more family merriment than the Nature episode), see here.
0 comments