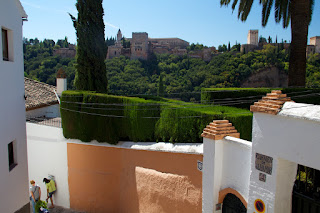 With the term over, I finally had time to look back at some of my photos (and papers). Here are some shots from the lovely workshop on "Natural Kinds in Philosophy and in the Life Sciences: Scholastic Twilight or New Dawn?" The title is a reference to a recent screed by the famous philosopher of science Ian Hacking called "Natural Kinds: Rosy Dawn, Scholastic Twilight". As the title suggests, Hacking thinks that philosophical research on natural kinds has entered a period of scholastic navel-gazing. I have two (conflicting) reactions to this. (1) No it's not! (2) He's wrong to think that it ever wasn't (in at least some sense) — it's just that our navels were previously out of focus. Right now, I'm more inclined to the second interpretation, no doubt partly because I'm busy writing two books on natural kinds! Fortunately, Hacking's arguments are pretty uncompelling.

Anyway, Hacking wasn't at the conference to defend his honor. And that's fine. The folks there were for the most part committed to the idea that there's something non-incestuous (or not problematically incestuous) about the idea of natural kinds in the biological sciences. I decided to talk about cell types — extending some of the sketchy thoughts offered at ISHPSSB a few weeks back. Finally, I have a decent draft of a paper on this subject:

It feels like just a start. But that's okay. I'm already way over the word-limit. And I'll definitely be coming back to these issues when I'm able to get back to writing my book on Biological Kinds. In the meanwhile, I'm all about species! Got a June deadline to worry about. . . .

Anyway, while at the conference, enjoying spectacular weather — I stayed a few extra days because I had a Tuesday/Thursday teaching schedule and I could — Lewisburg saw the worst flooding since the catastrophic 1972 Agnes flood. Bloomsburg, about 40 minutes away, was really devastated: like roads/bridges washed away, homes floating down the Susquehanna River, and so on. So between checks of the hydrological survey online and Facebook updates of emergency basement clearings — our house, being on a hill, was unaffected —, I was touring the Alhambra. Bizarre. I missed the whole flood visiting a parched country.

I was delighted to receive a David T. Scadden Fellowship to fund a project investigating the philosophical and biological underpinnings of the concept of biodiversity. It seems to me that this term is much used, but poorly understood. The more I've thought about the vagaries of biological classification, the more problematic the issue seems.

So starting in the Spring 2012 term, I will be running an interdisciplinary reading group on the nature of species and biodiversity. The group will include a mix of students and professors and we will read several books and articles — to be decided, but right now I'm thinking about reading Wheeler & Meier (eds.) Species Concepts and Phylogenetic Theory: A Debate, Richard Richards' The Species Problem, James Maclauren and Kim Sterelny's What is Biodiversity?, and some chapters form my book manuscript, Are Species Real? (forthcoming from Palgrave-Macmillan in 2012), among other things. Meetings are tentatively scheduled for alternating Wednesdays from noon-1PM (over lunch).

Students may join the reading group for credit (a full course-credit section of PHIL 320). If you're interested, please send me an email (matthew.slater@b...) or come chat with me about your experience/coursework in biology (and philosophy, if any). Specific requirements (papers, projects, &c.) for receiving credit will be negotiated on an individual basis.

The Fellowship will also allow me to fund one or two students to continue their research over the summer or fall of 2012 (and possibly attend a relevant conference). So students who are interested in getting some independent research experience on biodiversity are especially encouraged to join.
0 comments