I can't shut down my computer when MS Word is running, because whenever the computer attempts to quit it, Word crashes and then opens the Microsoft Crash Reporting program. I've gotten used to this, partly because I've been successful reducing my usage of Word to simply formatting my bibliographies when I'm ready to send out a paper. 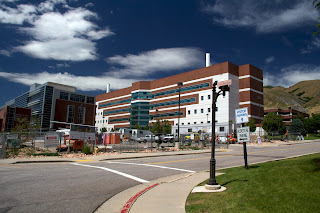 I just got back from my last philosophy-related trip for a good two months: my first time at the biennial meeting of the International Society for History, Philosophy, and Social Studies of Biology (ISHPSSB, pronounced as “Ishkabibble” by its members). The idea of the conference is to bring together a bunch of humanists and biologists and get some good cross-disciplinary discussion going. And I have to say, the conference did a nice job at this. I was in a triple session on cell signaling that included biologists Brian Hall (one of the early founders of Evo-Devo!), Scott Gilbert (a prominent developmental biologist — he wrote the textbook I and everyone I know learned developmental biology from), Karl Matlin (a professor of surgery at the University of Chicago), and other philosophers, historians, and sociologists (Barton Moffatt, Ken Waters, Beckett Sterner, Christina Brandt, Hannah Landecker, and Andrew Reynolds: the organizers of the session). Unfortunately Scott had to return early for a minor medical emergency, but otherwise, I thought the sessions were really good. There turned out to be a good deal of cohesion between the talks and some good discussion. And, as I've mentioned before, Utah is still gorgeous! This time, I brought my camera! 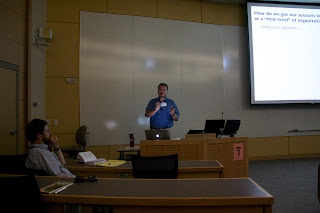 For some reason, I was particularly anxious about this talk. This isn’t usually an issue for me, but I had the distinct feeling that I had bitten off more than I could chew as I was preparing for my presentation. When Hannah and Andrew posted the idea for the session in the ISH (“Ish”) discussion board, I thought: “Oh, I can see how one could give an account of cellular kinds by drawing on research on cell signaling!” I wrote the following abstract for my talk:


Talk of different types of cells is commonplace in the biological sciences. We know a great deal, for example, about human muscle cells by studying the same type of cells in mice. Information about cell type is apparently largely projectible across species boundaries. But what defines cell type? Do cells come pre-packaged into different natural kinds? Philosophical attention to these questions has been extremely limited (see, e.g., Wilson 1999 and Wilson, Barker, and Brigandt 2007). On the face of it, the problems we face in individuating cellular kinds resemble those biologists and philosophers of biology encountered in thinking about species: there are apparently many different (and interconnected) bases on which we might legitimately classify cells. We could, for example, focus on their developmental history (a sort of analogue to a species' evolutionary history); or we might divide on the basis of certain structural features, functional role, location within larger systems, and so on. In this paper, I focus on an especially promising way of thinking about many cell types which unifies much of this plurality. In multicellular contexts, cells become the sorts of things they are, find themselves where they are, and do the sorts of things they do in virtue of complex communication networks with other cells. Cells, in a sense, announce — or are told — what kinds they are and take up their proper roles accordingly. While this cannot be the whole story about cell type individuation, it seems to me an important component. The paper will conclude with some preliminary thoughts about how to think about the plurality of ways to divide cells into kinds and whether a "Cell Problem" analogous to the infamous "Species Problem" results.

I titled my paper “Hi, I’m a Fibroblast!” — an attempt at a clever reference to my signaling metaphor; think conference name badges. This lead to several references in Brian Hall’s talk along the lines of “we’ll be hearing more about fibroblasts in the next talk….” Oops: I guess I set expectations for biological-information content too high!

Anyway, troublesome details about the workings of signal transduction started revealing themselves as I looked into the literature a bit more — troublesome for my name-tag analogy, anyway. Damned reality! I was hoping that I’d be able to offer a sort of top-down approach to kind membership for cells rather than the recursive, bottom up stance about kinds that is currently popular. It turns out that some cells do different things even when they receive the same signal (in the chemical sense — I suppose one could argue that it’s a different signal in a more nuanced, context-sensitive sense). So unless we were prepared to paper over such differences in a cellular taxonomy, other internal features of cells are relevant to how they integrate themselves into signaling. It’s as if name tags meant different things in different rooms or depending on who else was around. There are other complications that I won’t go into here. Suffice it to say that I’ve got some work to do. Since I’m planning on presenting on this topic at a workshop on natural kinds in Granada in September, I’d better get on it. Sincere thanks to Matt and Jim for organizing such a fantastic conference. Big success, guys. 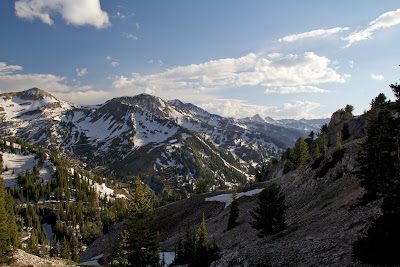 Aside from catching up with a lot of phil-bio friends, I was able to get up into the hills outside of Salt Lake City. Maureen O’Malley and I had a nice afternoon hike in Alta the day before my talk. We were initially cross that the dirt road to some of the longer hikes was closed off. So we started a short one and made it longer by going off trail a bit (though every so often, we’d say “oh, there’s a trail again!”) in order to get to the top of the ridge. As we tried to make a loop our of our there-and-back trail, we discovered the likely reason that the road was closed: even on July 13th, there was still a lot of snow up there. Go figure. Photos from the whole shebang here.