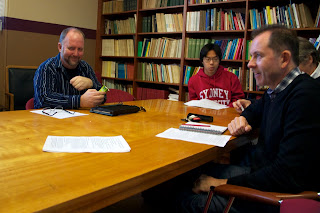 My last talk in Sydney was, appropriately, in the "Work-in-Progress" Seminar. As I mentioned in my previous post, Emma Tobin and I are working on a joint reply to William Goodwin's paper, "Structure, Function, and Protein Taxonomy". We're still in thinking-stage now, squeezing it in between other projects. So the WiP Seminar offered a good opportunity for me to think out loud a little. 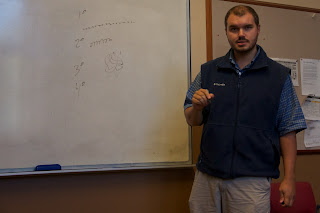 One of the strange things about my reaction to Goodwin's paper is that I'm not really sure how much I disagree with him (or he with me). He wants to say that amino acid sequence plays a "fundamental" role for protein taxonomy in that it substantially determines the possibilities for protein function. True, which of these functions are realized may depend on biochemical context, but that's something that biochemists can accommodate in their practice. He makes a number of other points, but this seems to be Goodwin's core position. And I don't disagree substantially with it. Clearly, the possibilities of "higher-order" structures of proteins are constrained by its primary structure. But it's not as clear that this shows that primary structure delimits different protein kinds. In my (2009) paper, I argued that counting by primary structure plausibly undercounts protein kinds. The same primary structure can be differently folded in different contexts and assume different biochemical functions. Emma noted a similar point in connection with intrinsically-disordered/unstructured proteins: sometimes there's simply no single "native" folding (the kind of conformation that encourages the anthropomorphic language in videos like the following).

The pluralist about protein taxonomy, in my view, takes such facts as giving us good reason for refusing to make generalizations about how to classify proteins. Perhaps in some cases we ought to divide by function and in others by primary structure; perhaps in some cases, tertiary or quaternary structure is stable and fruitful enough to be useful. The monist's claim appears to be a normative one: that one should conform one's categories to those defined by primary structure. It's not totally clear to me that Goodwin would accept even this much. Perhaps monism for him is a metaphysical/explanatory thesis: that primary structure is explanatorily fundamental. I don't think I know what this means, though. . . . And even if there turned out to be some sense of 'explanatorily fundamental' that attached to primary structure, again, I don't see how it would show that it should have a 'fundamental individuating role'.

I was thinking about this sort of analogy from metaphysics. One flat-footed justification for primary-structure-monism could be that biochemists often say things like "proteins are certain polymers of amino acids", suggesting that they ought to be divided into kinds on that basis. Likewise, one might be tempted to say that statues are certain conformations of lumps of clay (or what have you). That looks like an identification on the surface. But it’s problematic. For when I steamroll the statue of David, I destroy the statue but not the lump of clay. Lump is squashable; David isn’t: so they must be different things (goes the thought). Indeed, I might take Lump and reshape it into a statue of Joe the Plumber. David ≠ Joe, so it can’t be that David = Lump and Joe = Lump by the transitivity of identity. Certain metaphysicians want to say that the Lump constitutes David. I think this response has some problems (despite its obvious appeal) in this case, but I find that I'm tempted to give this sort of response in the protein case. While biochemists often say that proteins are strings of amino acids (suggesting that a monism about 1-ary structure is appropriate to describe biochemical discourse), what they mean is that proteins are (mostly) constituted by amino acids. Perhaps ‘protein’ is actually ambiguous between meaning just polypeptide strings and some more complicated notion with connected to structure and evincing different identity conditions.

Apply the statue/clay analogy back to biochemistry. Here’s a globular protein: when I denature it, have I destroyed it? I feel a bit torn. Well: I’ve most likely taken away its function, but as Goodwin might insist, it still has that function inasmuch as it retains the capacity to refold and execute that function in the proper circumstances. (Capacities are funny, though: as David Lewis wrote, he has the capacity to speak Finnish; but don’t take him to Finland, because he can’t speak Finnish!) But now let’s reform the lump: take our polypeptide into a different context where it refolds into a radically different globular structure. How many different types of proteins has this story been about? There’s been one polypeptide but two proteins, I can imagine being inclined to say (filling out the details in certain ways). This is roughly what I had in mind when I cited the possibility of different "modes" of classification. I don’t think that this is pluralism exactly (I might be changing my mind from what I wrote in 2009 — or perhaps I wasn’t clear about it there). The pluralism comes from there being cases of the same basic structure where we lump instead of split (or vice-versa), perhaps because we are impressed with certain functional differences or what not. And the point is that there doesn’t seem to be any fact of the matter about what level of organization is more important for doing so. Take Emma's example of different hemoglobin isoforms: judged on a metric of amino-acid similarity, it might be that the functionally very different forms are much closer together (they might have just one substitution), whereas the silent polymorphisms are much farther apart in terms of their primary structure. Paul Griffiths pointed out to me that there’s a nice analogy with databases of RNAs: geneticists often have to annotate the sequences so as to cross-classify rather dissimilar sequences which are similar but which have different higher-level structural properties.

Once again, I'm indebted to the Sydney crew for their insightful comments/questions on my ramblings on this topic (and others). They sure were a good group of people to hang out with. Now returned to the Northern Hemisphere, I'm happy to be enjoying summer again, but sad to have left their company (and the beauty of Sydney!). I'd certainly encourage philosophers/historians of science to apply to their visiting fellows program (especially if they like bushwalking!).
0 comments

Talking and Walking in Sydney

Last week started my first week properly at the Centre for the Foundations of Science at the University of Sydney (rather than merely a resident of Sydney). We got right to business with a reading-group session in Paul Griffiths’ office on a very interesting paper by John Wilkins on whether species should be considered as theoretical objects of biology (objects necessary for biological explanation) or rather as targets of explanation. This was warm-up for his seminar on the 15th to which I’m looking forward. After that, I started getting situated in the Centre office, in the front of the amazing Quad building. Because there aren’t a lot of other visitors to the Centre at the moment, and the administrator is on leave, I’ve so far had this huge office to myself (I’ll post interior photos soon).

On Wednesday, I gave my own talk in the seminar series. Again, it was on material drawn from my paper on stable property cluster kinds — this time on the heart of the concept of stability I think makes for a more general account of natural kinds, developing some of the ideas I started working out in the UK last fall. I was, I admit, a little reticent about this since the paper straddles the fence between criticism and friendly amendment to the Homeostatic Property Cluster (HPC) account of kinds — an account that one of my hosts (and the chair of the session) Paul Griffiths has done much to articulate and promote. Couple that with the fact that the audience was sprinkled with philosophical heavyweights (e.g., Huw Price, shortly to take up the Bertrand Russell chair at Cambridge), wicked-smart metaphysicians (Rachel Briggs, David Braddon-Mitchell, Kristie Miller, &c.) and a host of philosopher of biology (Wilkins, Dominic Murphy, Mark Colyvan, and walking-biological-encyclopedia Maureen O’Malley) and the Q&A session was ripe for devastating objections. Fortunately, though, the audience was ideal: challenges were offered in a friendly and productive spirit and suggestions for clarification and extension were unusually helpful. Whew! Thanks everyone!

Once again, though, I have another talk to prepare before I’m able to really process the questions and suggestions that came up. Fortunately, it’s a “Work-in-Progress” seminar in a room without slideshow capabilities (lest I get tempted): so there’s no demand to present something “polished”. The plan is to start working out a reply to a paper William Goodwin recently published in Biology & Philosophy criticizing papers by me and Emma Tobin about protein classification. Emma and I are talking about co-writing the response. But first I need to sort out what I want to say. . . . 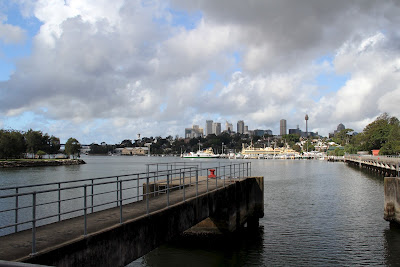 Meanwhile, Maureen took me walking in Balmain (basically across the bay from Glebe), a former factory district, now turned site of rather expensive cottages, with lovely views back east onto the inner harbors. Photos from that (and around Glebe) here. Tomorrow I head out into the Blue Mountains, west of Sydney for a long walk (aka “hike”) with Paul, Maureen, and Kristie. Hopefully the weather will hold enough for some nice shots of the many vistas we’re supposed to enjoy.