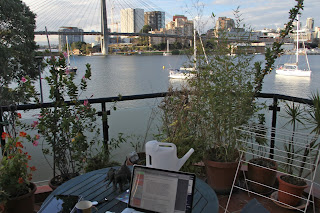 After a one day delay because I and the Australian government were stupid about visa issues — I won’t try to settle who was more stupid (though let’s just note that if their credit card processor for visa transactions had been working, I’d have gone on my flight no problem) — I finally survived the 2-hour, 4-hour, then 15-hour flights and made it to my home base off of Blackwattle Bay in Sydney. I’m just adjacent to a little park with running trails. The runners and the rowers constantly crossing my view both shame and inspire me. To stay up and get adjusted to the 14-hour time difference, I walked for about five hours around to the fish markets and then around Pyrmont.

But then it was back to preparing for the talk I'd give at ANU the next day. I had originally planned on talking about the problems facing the species-as-individuals (SAI) metaphysic (something I’ve been thinking about for a good while now); specifically, addressing the move that my friend Matt Haber suggested to me back in Utah and why it didn’t look very promising to me. But on the plane ride over, I started thinking about the issue from a methodological perspective (inspired by the discussion at MPSC2011) and wrote out a different talk where I said a bit about the worries for SAI, a bit about my (supposed-to-be non-worrisome) alternative view, and concentrated on the status of SAI as a piece of “naturalized metaphysics”. It seems like an interesting case to me, since (if I’m right about it) we have some scientists reading off metaphysical conclusions from the science which I think decisively run afoul of considerations from analytic metaphysics. So it’s a case where naturalizing metaphysics goes wrong — or better, where you can't just read off the metaphysics without doing significant work in the very domain that the philosophers of science often find themselves decrying. After writing out all this and what to think of it, I managed to leave my notebook on the plane. Damn! The only consolation was that it was a brand-new notebook and I didn’t lose any other bright ideas. 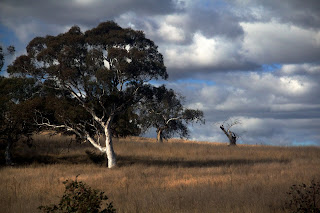 In the haze of my jet-lag, I tried my best to put together a coherent and interesting talk, mostly on the train to Canberra (some lovely views!). I can’t judge whether either aim succeeded. The schtick for talks there is quite something. It starts off with a seminar with the graduate students, designed to fill them in on any necessary background. Then we retire to a balcony/courtyard thing for tea and biscuits. Then there’s the talk and Q&A that goes about two hours. My audience was sympathetic of my jet lag but not with my ideas, raising worries and challenges that will keep me busy for a while. (I certainly wasn’t able to offer satisfactory replies there — judging from their facial expressions, anyway. At least Dave liked my fonts. . . .) But that’s exactly what one wants out of this kind of experience. Thanks in particular are due to Dave Chalmers, Adrian Currie, Zoe Drayson (my old pal from Edinburgh), Dan Korman (my old pal from metaphysics talks at various APAs and seminar convener), Daniel Nolan, Wolfgang Schwarz, Adam Sennet, and Daniel Stoljar (and probably others I’ve undeservedly forgotten). 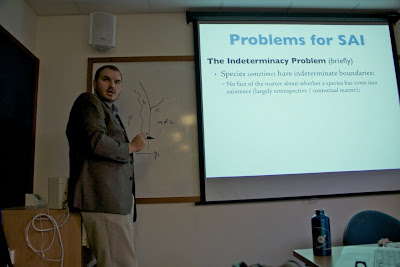 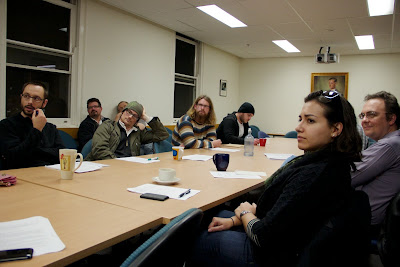 Most of these photos taken by notorious conference/talk photojournalist, Dave Chalmers. Thanks! I'll be collecting more photos from Australia as I have time to upload them here.

Back in Sydney now, I have to put off processing all this in order to prepare for my next talk on the 1st on a completely different topic (expanding something else from my paper on SPC kinds). My walk over to Darling Harbour will have to wait.